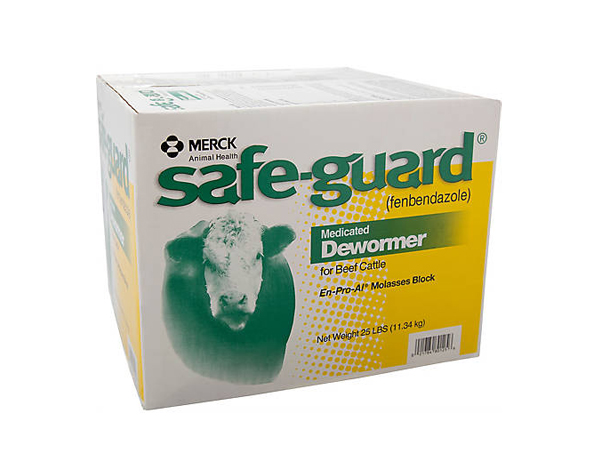 Free-Choice Clearance
The Safe-Guard 20% Protein Blocks are approved for free-choice feeding to pastured cattle. Ingredients are specifically formulated to ensure proper consumption of Fenbendazole over a 3 day period.

Adequate forage must be available at all times to cattle receiving supplemental block feeding. Safe-Guard (fenbendazole) 20% Protein Deworming Block (Medicated) is designed for deworming pastured cattle by feeding these medicated blocks for three days only as the sole source of salt.

It is essential to establish full cattle adaptation to supplemental block feeding prior to treating cattle with Safe-Guard 20% Protein Deworming Block (Medicated). Cattle behavior and per capita consumption must be established by feeding nonmedicated 20% Protein Blocks prior to medicated block treatment. Adaptation to block feed intake for medicated treatment may take twelve to nineteen days of prior exposure to unmedicated feed blocks depending on consumption rates and environmental conditions. When cattle block consumption of 0.1 pound (1.6 ounces) per 100 pounds of body weight (or 1.0 pound for mature cattle) per day is attained for several days on the nonmedicated 20% Protein Block, the three day medicated treatment with Safe-Guard 20% Protein Deworming Blocks (Medicated) may begin.

For effective treatment, the cattle must consume an average of 0.1 pound of Safe-Guard 20% Protein Deworming Blocks (Medicated) per 100 pounds of body weight each day for the three days of treatment. This is equivalent to an average of one pound per head per day to mature cattle for the three days of treatment in order to provide a total dose of 2.27 mg fenbendazole per pound of body weight. To commence deworming treatment, replace the nonmedicated blocks with Safe-Guard 20% Protein Deworming Blocks (Medicated). Place these medicated blocks at the same locations where cattle have demonstrated adequate per capita block intake (0.1 pound per 100 pounds of body weight per day).

Following the three day treatment any remaining Safe-Guard 20% Protein Deworming Blocks (Medicated) should be removed from the pasture and cattle may be returned to their normal supplemental feeding program. Remaining blocks or portions of blocks can be utilized for retreatment purposes if used prior to expiration date. It is essential that good block feeding husbandry practices be followed at all times. Block feeding techniques include, but are not limited to, a variety of practices. Blocks should be first located in those areas where cattle are seen to browse or loaf. It may be desirable to relocate unconsumed blocks to locations where obvious block consumption is identified. Increased consumption may often be obtained by moving feeding stations into shaded or loafing areas, closer to water source, increasing the number of blocks available to the animals or combinations of these practices. Decreased consumption may often be obtained by the reverse of the above practices.

*Number of head fully treated by each block when consumed in three (3) days.