Seeds Of Growth: Kentucky Proud Business Has Stayed Ahead Of The Curve Throughout Its 65 Years 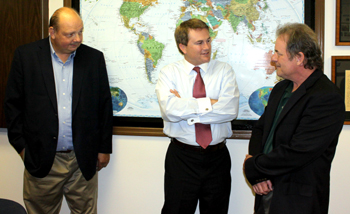 Seeds of growth: Kentucky Proud business has stayed ahead of the curve throughout its 65 years

LOUISVILLE, Ky. – When decorated military veteran Forrest Caudill returned to his native Shelby County dairy farm after World War II, he was glad to be back home in his native Kentucky. But he no longer felt at home in the milking shed.

“He had one goal in life, and that was to never milk another cow,” said his son, Dan Caudill. “It’s a tough way to make a living.

“He didn’t want to spend his life on a dairy farm. So he started harvesting bluegrass, which was a big commodity back in those days.”

Pat Caudill, Commissioner Comer, Dan CaudillSuch was the genesis of Caudill Seed Co. In 1947, Forrest started traveling to farms and military reservations such as Fort Knox, collecting the seeds from fields of tall bluegrass using old-fashioned threshing machines and splitting the crop with the property owners.

Like a seed sprouting in spring, Caudill Seed began to grow, prompting a move from Shelbyville to Versailles. In 1959, the fledgling business made a bold move to Louisville’s Butchertown neighborhood across from bustling Bourbon Stockyards.

“The strategic location of that day was to be close to the stockyards,” Dan said. “Dad’s theory was that farmers would sell their livestock, then walk across the street and buy their seed.”

Forrest’s strategy proved successful. Sixty-five years later, seed is still the heart of the Caudills’ family business, although it has diversified into other areas such as organic foods. The company has 180 employees in three Kentucky locations – Morehead, the Floyd County town of Allen, and Louisville – and a small facility in Granite, Okla.

“He was a fantastic, hard-working guy,” Dan said of his father, who died 12 years ago.

“We believe Kentucky Proud is an investment in Kentucky’s land, people, and its future,” Pat said. “We urge all Kentuckians to buy Kentucky Proud products at every opportunity.”

“Kentucky Proud has meant a lot because Pat and I are multi-generation Kentuckians,” he said. “Our great-great-great-grandfather is from Letcher County, so we go way back with Kentucky roots.

“We love Kentucky and want to support Kentucky businesses. There’s a lot of networking done through Kentucky Proud. It’s a great way to network with large and small companies. I know Jamie will continue the great work done there.”

“They’re a signature agribusiness in Kentucky, and we just want to tell them how much we appreciate them, see how we can continue their growth, and thank them for their accomplishments,” Commissioner Comer said in a radio interview before the tour with veteran farm broadcaster Jack Crowner of Clear Channel Communications.

Dan Caudill and Commissioner ComerCaudill Seed distributes its signature products throughout Kentucky and five surrounding states. Dan said Caudill’s most famous seed is Kentucky 31 tall fescue, which was discovered growing on a Menifee County farm in 1931 by Dr. E.N. Fergus of the University of Kentucky. The hardy grass was introduced to the U.S. from Europe in the early 1800s.

“Kentucky 31 was developed by the University of Kentucky, and it was almost as good as their basketball teams,” Dan quipped. “We still sell a tremendous amount of it.

“This year, we’ll produce 500,000 pounds of grass seed from Kentucky,” Dan said, noting that Caudill currently contracts with six Kentucky growers after not having any last year. “Kentucky used to be a big [grass seed] producer, and we can bring that back.”

Caudill sells more than seed. To modify a line from an old Barbara Mandrell song: “Caudill was organic when organic wasn’t cool.”

Caudill went into what then was called the natural foods business in 1983. “We were growing beans and peas chemical-free back before ‘organic’ was a word,” Dan bragged.

One of Caudill’s divisions, Whole Alternatives, packages edible seeds and beans for human consumption under its Wild Harvest brand or other brands, then distributes them throughout North America.

Whole Alternatives has carved out several niches in the organic food world.

“We’re the largest manufacturer and distributor of organic microwave popcorn in the world,” Dan said proudly. Most of the popcorn is grown in Indiana, but some comes from Kentucky, he said.

Dan led the tour group into a large warehouse room filled with bags of mung beans, which are small, round, green-colored beans that resemble peas.

“There are more mung beans in this one room than anywhere else in the world,” Dan said. “La Choy [brand] puts our beans in all of their chop suey.”

“We appreciate what you do,” he told Dan, “for the agribusiness economy in the state and here in Jefferson County.”